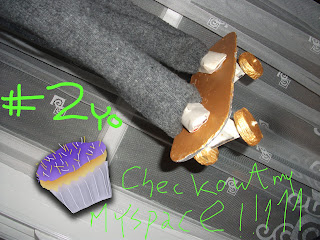 I won second prize at a fashion show on thursday for my fake skating legs costume. Larthur nominated me using her sway with the judges. I modelled the skateboard, performing some "skillz"; railslides, ollies et al, while simultaneously doing "the robot". My prize was a cupcake. It had purple icing on it innit.
Unfortunately no one I knew had a camera with them so I don't have any photos of me in action, just this image of a be-legged skateboard dangling from my ceiling.
It really actually happened though, I'm not spoofing like some people I know.
BUT if you check out the next issue of GCN I think you may just find me gracing all of the pages, because I am so photogenic and covered in gold yo, therein lies my proof if proof be need be of a foundation for this claim of which I have claimed and heretofore seems false. 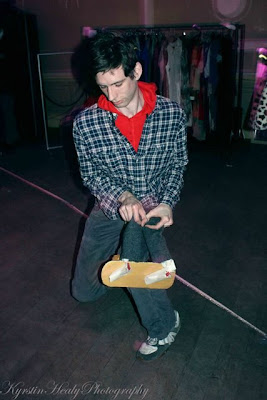 Photo by Krystin Healy
Posted by Unknown at 04:04

Places I go to: